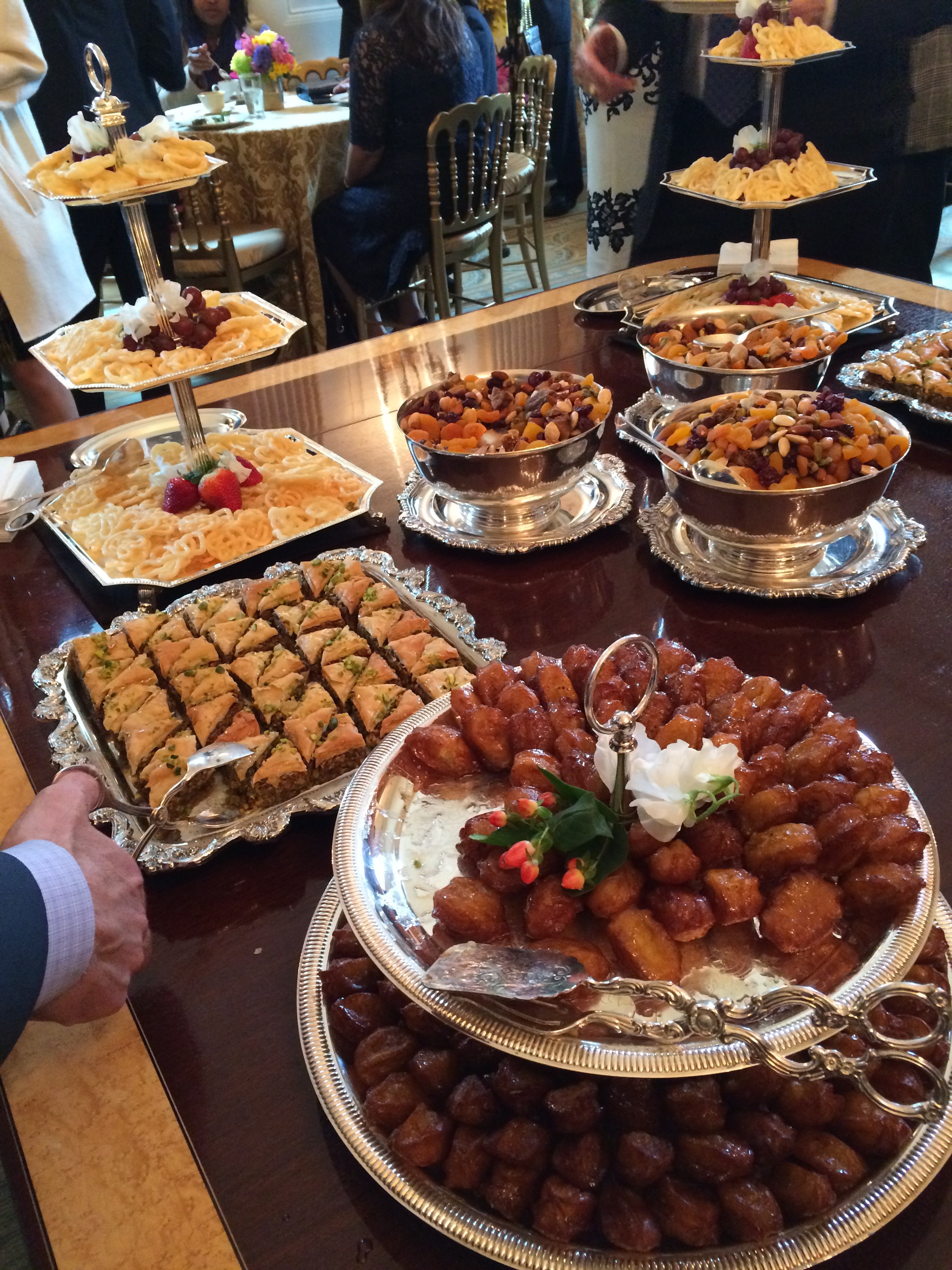 Inside the White House Kitchen: A Culinary Emissary’s Abode

Washington, DC has its fair share of surprises, but an ambassador sporting a chef’s hat? Or is it a chef fully proficient at being an emissary? Emissaries are not just experts in their own histories and cultures, but they are also adept conveyors of tradition to other societies.  Cuisines, being windows to equally a grandmother’s kitchen or royal banquet halls, capture traditions best – a warm waft of a dish can dig deep into any national and personal identities. 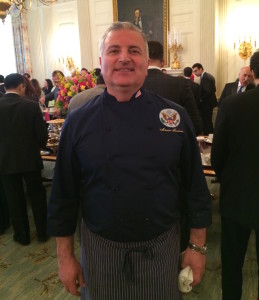 Chef Maziar Farivar knows this quite well, as he himself is one such culinary emissary.  He exemplifies an innovative approach to cross-cultural relations recognized by then Secretary of State Hillary Clinton and the State Department in its creation of the Diplomatic Culinary Partnership Initiative in 2012.[1]

This year, Chef Maziar, was a guest chef brought on to work directly with White House Executive Chef Cris Comerford and Pastry Chef Susie Morrison for a Nowruz celebration.[2]  Millions around the world, including Iranian-Americans, celebrate Nowruz, a spring holiday welcoming the New Year in many Central Asian calendars.

Chef Maziar was already an honorable member of the US States Department’s Culinary Diplomacy Corps, but leading the Nowruz luncheon was to put an albaloo – pardon, a cherry – on top.

“It is an honor to participate in any White House event.  Especially so for Nowruz […] the celebrations were to share my culture,” Chef Maziar explained, all the while thanking the White House staff for their meticulous support.

The Chef went into details of the menu, which featured a delicious array of dishes – some passed down through the generations and others the Chef’s own creations.

He was also conscious of the multicultural environment of the event, as Nowruz is also celebrated by Afghan and Tajik cultures.  He took into consideration the audience at the luncheon – a culturally and professionally diverse group – some who may not be acquainted with Iranian and Central Asian cuisines.

The menu reflected his incorporation of familiar dishes, like kabobs, with dishes that were lesser known but representative of Nowruz celebrations in the region.  Upon inquiring into the emblematic dish of Nowruz, Chef Maziar laughed and reassured, “Yes, Sabze-polo-o-mahi was served.”

It is not hard to imagine the attendees’ multisensory elation over this mouthwatering dish of herb pilaf and white fish.

“All of the flavors came out awesome […] It was well-balanced.”

Chef Maziar’s personal history is also a reflection of his balance of two worlds, so to speak. He was born in a small town near Urmia, Iran and moved to the United States with his family when he was young.  He attended school and worked in restaurants on both coasts of the US, but eventually decided to move to the Greater DC area to be closer to family.  And it was with the encouragement of his family, particularly his brother-cum-business partner, that he started Peacock Café in 1991 in the Georgetown district of Washington.

Just like his menu at the White House Nowruz luncheon, Chef Maziar was conscious of the menu at his own restaurant.  He was intent on serving wholesome but healthy food. Today, the restaurant’s menu features a delicious medley of Mediterranean and American mainstays.

When asked why no kabobs were featured on Peacock Café’s menu, he was quick to point to the eternal Kabob Dilemma.  He was fully aware of kabob’s place in Iranian cuisine, yet he did not want to reduce this vast and complex culinary history to a few morsels of meat, however juicy they may be. 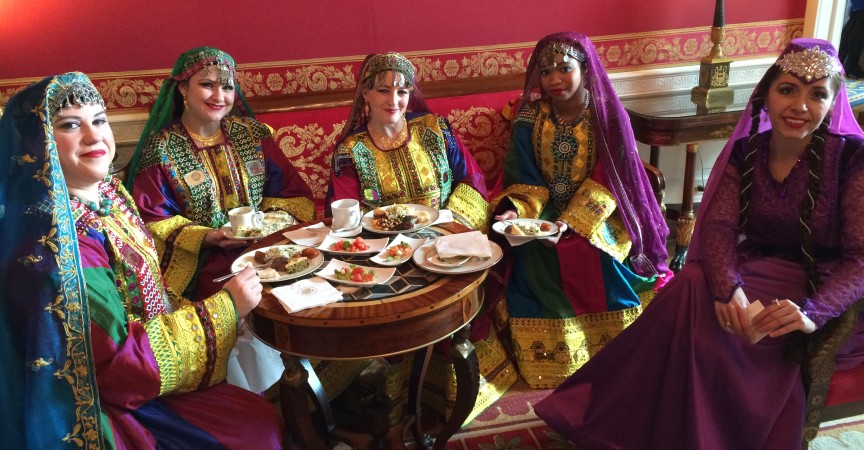 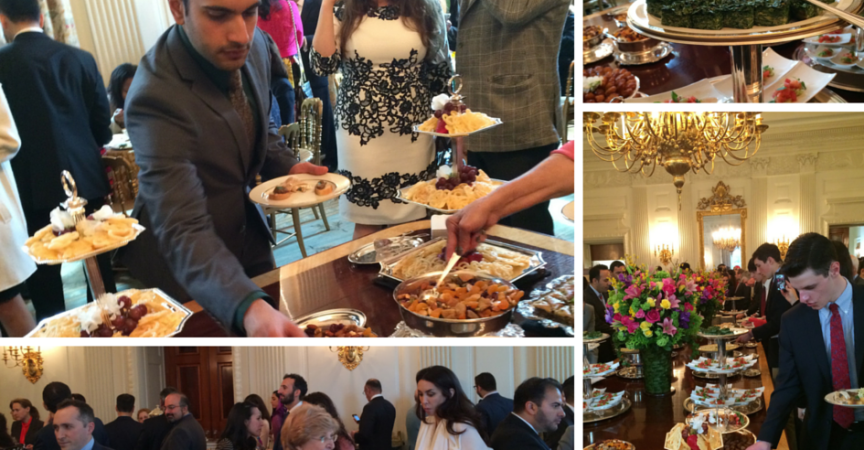 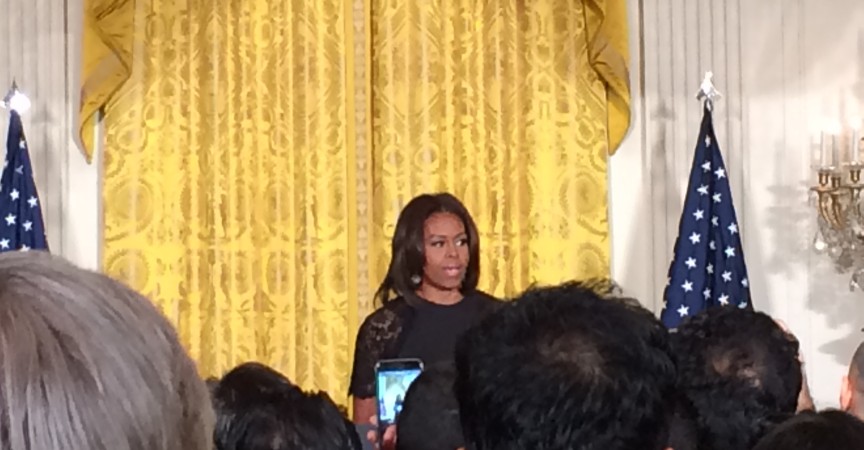 Through the menu at Peacock Café, and by extension, the dishes he serves at events like the Nowruz Luncheon at the White House this year, Chef Maziar puts on his emissary hat.  He is intent on introducing lesser known, and arguably tastier, Persian dishes to Washingtonians.  One of these dishes is Naz Khatoon, a distant cousin of babaganoush, or a sweet and sour fish dish with hints of dried apricots, figs, and almonds.

The idea was to introduce Persian cuisine, but with a twist. Whether the change was in presentation or flavor, Chef Maziar nonetheless wanted to remain authentic to the origins of the dishes.  Both Persian and non-Persian American diners are pleased with this unique approach to an otherwise ancient cuisine.

He is proud of what he is accomplishing, and rightly so.

After all, not many menus in Washington – or matter of fact, around the world – can boast seafood jambalaya side by side with Albaloo polo.