Growing up in a small town in the Midwest provided few opportunities to experience international foods. At home we ate pot roast and chicken and rarely went out to a restaurant. I’d eaten plenty of spaghetti as a kid, but that didn’t mean I had eaten Italian food. Mexican food had never been served in my home, nor had German, Greek or Middle Eastern dishes. Once I left home and began making food choices on my own, I was amazed at the variety of options.

In my thirties I thought I was pretty savvy about food and had even become a respectable cook, delighting and sometimes frightening my two sons with a variety of dishes I’d discovered while traveling the country for my job. Around that time I was regaling several colleagues with stories of my cooking skills when one of them asked about my experience with Middle Eastern food. I admitted my palate had never reached further east than Greece, so he immediately insisted we have lunch that day at a nearby place he knew. It would be generous to call it a restaurant. The menu was very limited, but what David wanted to introduce me to was falafel. Falafel? What the heck was that?

He just assured me I would enjoy it. David is Lebanese and explained that falafel was as ubiquitous in his home country as hot dogs are in the States. As a dedicated carnivore, I was skeptical about a food item that contained no meat, and included vegetables and spices I could not have imagined being served together, and some I’d never experienced before. So, there we were, in a small shop, a cross between a convenience store and a fast food joint. David ordered, and when our food was ready, he explained about the several yogurt-based sauces available. 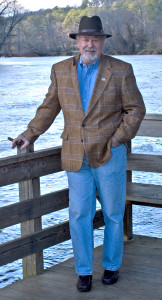 Michael Cain is an author, a PTSD coach at Ft. Bragg, NC, and a longtime food lover who recreates favorite dishes from restaurants he has visited during his extensive travels. He will periodically share his favorite food moments with NooshTube.