Mediterranean Mixology – Alchemy with a Twist 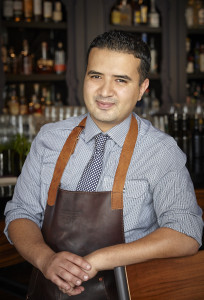 Ah, yes… mixologists. Would it be so farfetched to call them the alchemists of the culinary world? With pinches and dashes of sundry ingredients, they spice up occasions with ease.

Taha Ismail is one such tinkerer of tonics based in Washington, DC. As head mixologist at Kapnos, and having worked at other Mike Isabella restaurants like Graffiato, Taha currently has his signature on over 50 cocktails. His drinks have been enjoyed by many DC politicos – including First Lady Michelle Obama and Supreme Court Justice Sonia Sotomayor.

How Taha wound up serving bigwigs is an interesting story. Born and raised in Morocco, Taha moved to Virginia as a teenager, and just as quickly started mixing away. His first job was in high school, when he made sodas and ice cream at a diner.

Though he now has a degree in finance under his belt, he knew that a life in a cubicle and the monotony of 9-5 was not the lifestyle for him. He loves putting his hands and using his hands and senses to work. Most importantly, he is a people person. The alchemist in him loves to create, particularly taking cues and ingredients from his cultural background.

As Taha puts it, the Mediterranean is like a big neighborhood… well, at least in a culinary sense. The cuisines along its shores share many similarities in what and how they eat, reflecting the climate and interconnected history of the region. Certain flavor-profiles, for example the ubiquitous use of olive products and fresh herbs, cut across nations and cultures of the Mediterranean. Taha points out that this is an integral aspect of Mike Isabella’s restaurants – each of them strive to get back to the essence of Mediterranean cuisine.

This pan-Mediterranean culinary ethos is also shared with alcohol. Arak, or its sister drinks like ouzo from Greece and Italian sambuca, all share the same anise flavor profile and high alcohol concentration. It’s a drink that conjures up images of men sitting at the local pier, mixing arak with water while eating the fresh catch of the day. In downtown DC though, Taha treats it similar to absinthe, using it sparingly to brighten up a drink – as a little goes a long way.

Though the Mediterranean basin’s cuisines share many commonalities, each country also has its own unique flare. Taha knows the flavors of Morocco very intimately, and he explains how the cuisine of this multicultural nation is reflective of its long history at a crossroads. Original Berber and Saharan culinary staples were layered over the centuries, whether through conquest or commerce, with influences from Visigoths, Arabia, Iberia, etc. Now, Moroccan cuisine is world-renowned for its array of dishes.

These Moroccan memories are infused in many of Taha’s drinks. Moroccan mint julep is extensively used. Sometimes he mixes pinches of coriander, cumin, and even a little saffron.

He explains that he likes to drink how he eats: well-spiced.