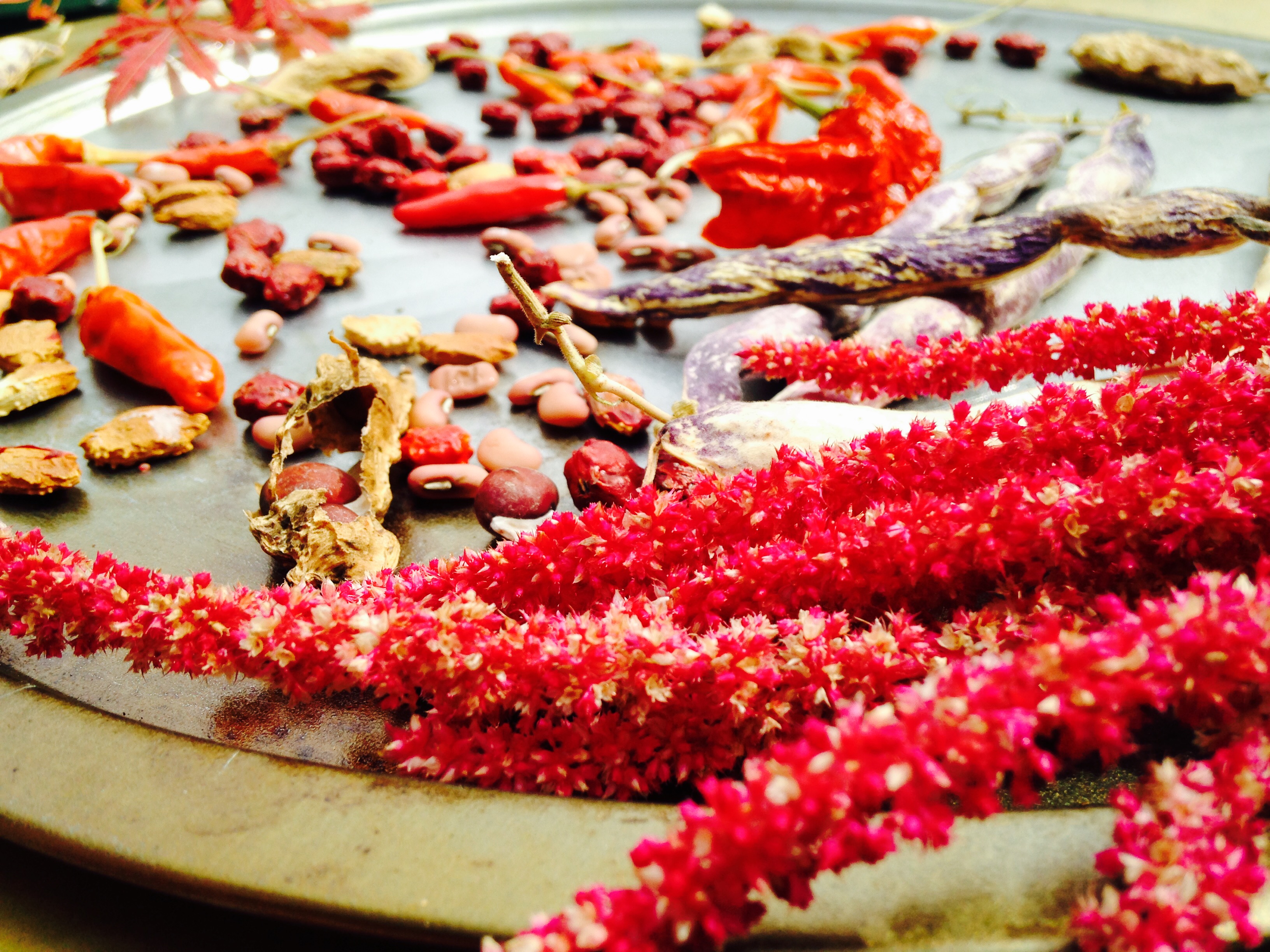 Come autumn, my mother starts acting like her seventy-something year-old self – that is, grouchy, itchy, and nostalgic. The season has always been an anomaly to her tropical body and soul. What was up with the brightly colored leaves? Taunting her with their false heat of oranges and reds while the air was brisk on her white sari. She never liked autumn, not one bit. But that’s mostly because the arrival of autumn meant one thing – the waning of her beloved garden. It was where my mother preserved the many tastes, textures, and smells of our homeland.

Our family garden was never a showcase of aesthetics, nor was it a negligent plot of overgrown ivies. It was somewhere in between, where weeds met heirloom tomatoes. While the rest of the street was busy growing dahlias and tulips in their front yards, my mother grew peppers and peas right along the driveway. Why waste space? She would bark back anytime one of us complained of our front yard looking like a farmer’s market. If that was the sight of the front yard, our backyard became a Silk Road bazar. Come summer, there were crops that even the home countries forgot how to eat! Eggplants that still looked like eggs, potatoes that climbed, and of course, a grape vine that refused to show us sweetness. There were many occasions when neighbors would come knocking on our door – equally curious and worried as to what unknown vine was creeping into their yard. Pumpkin-like gourds rolled down the hilly yard into neighbors’ swimming pools, and chipmunks brought half-eaten apricots to the neighbor’s barbeques.

My brother once told his teacher that he lived on a farm, because the reality wasn’t so far from it. While neighbors contracted landscapers to tend their lawns, my mom scoffed that she had a whole army under her roof. Already the matriarch of many households, the garden though was my mother’s true realm. She had all the work out for the family – who would do the tilling in the spring, clearing the weeds in the summer, watering the fruit trees versus the vegetable plants, and so on. For a good portion of the year, my mom forgot her true age, strengthened by the sun she basks in the whole day and supported by the plants she knows individually by name. The line between tending a garden and raising a family blurs all too often. 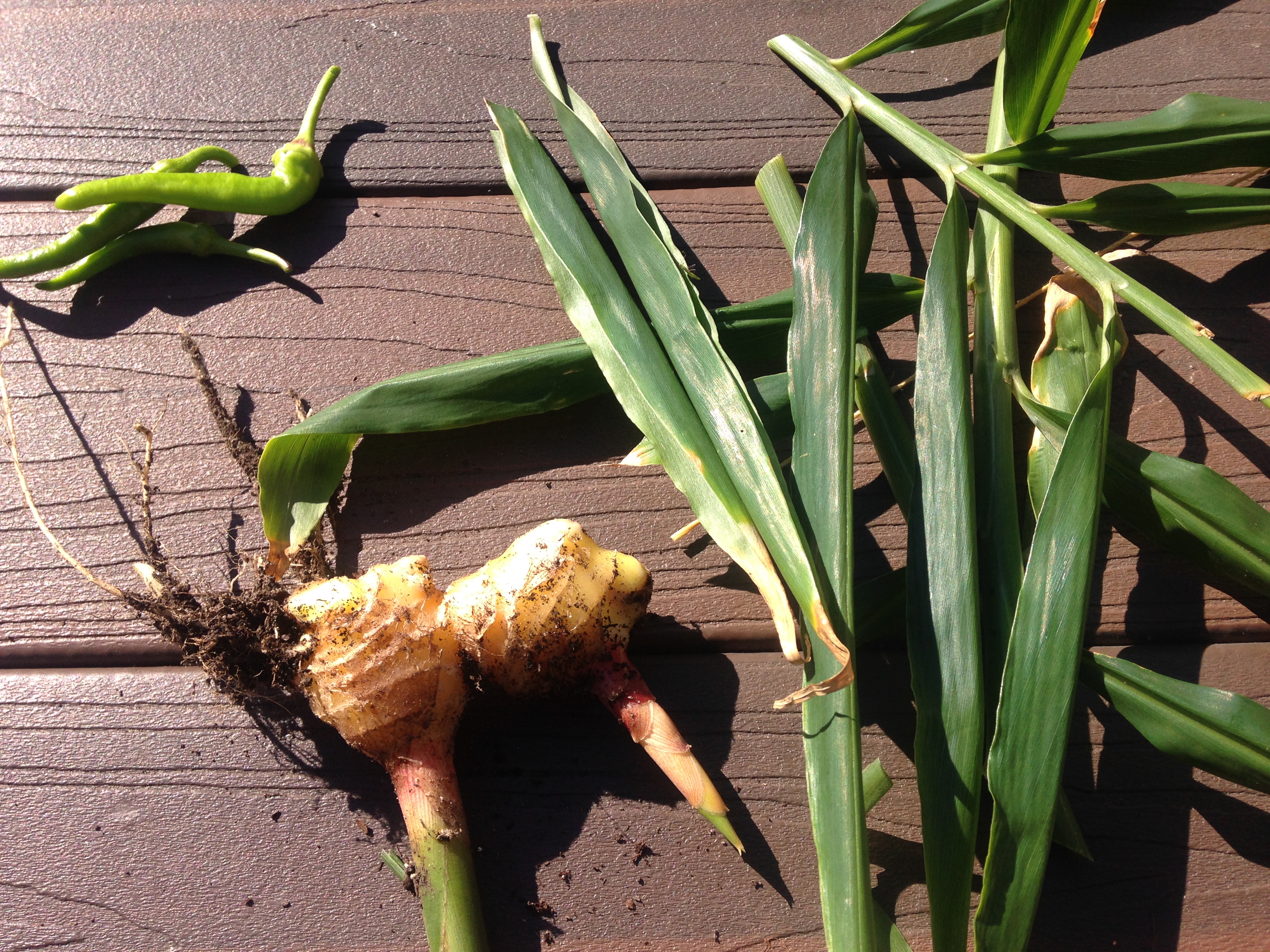 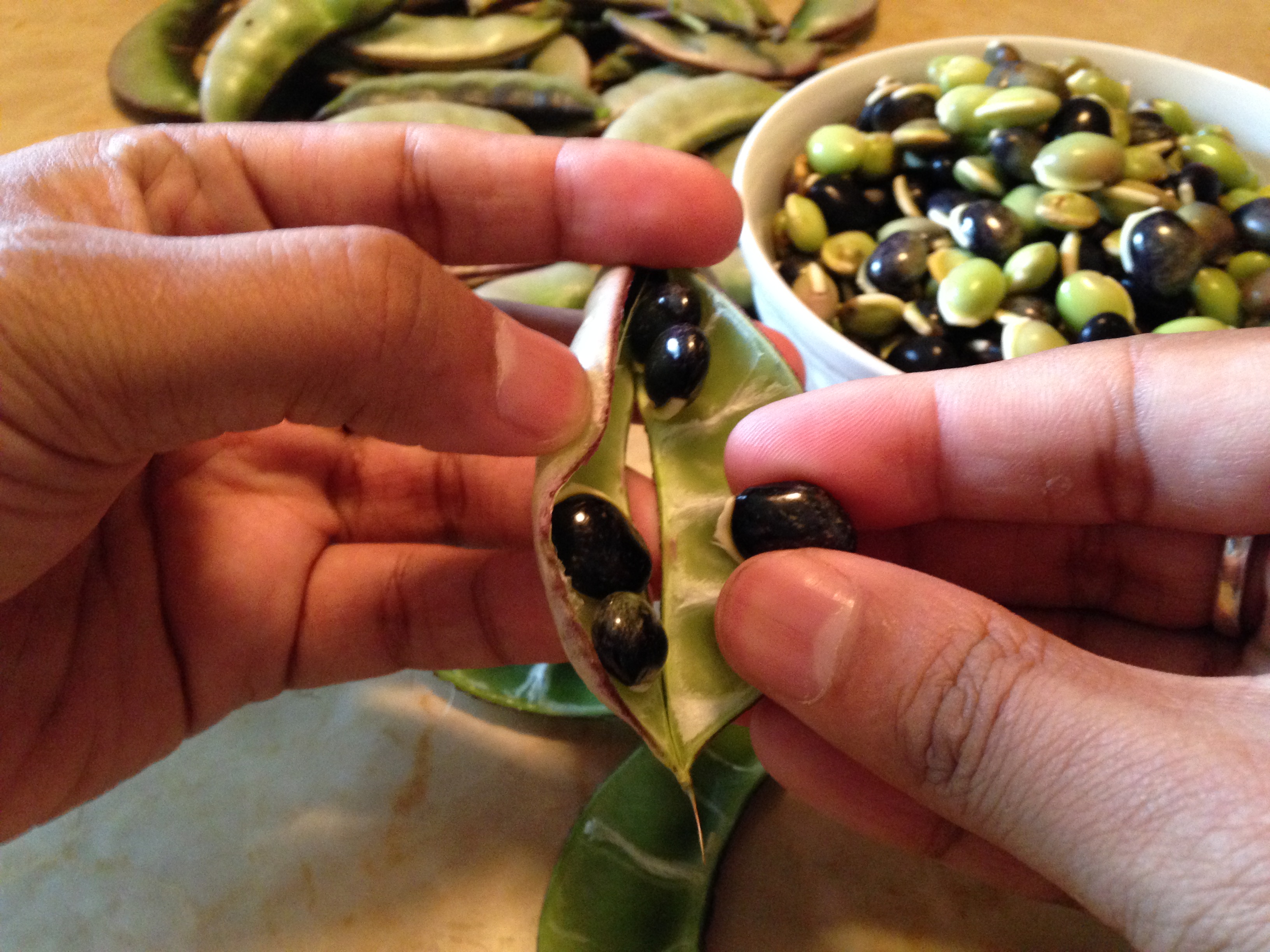 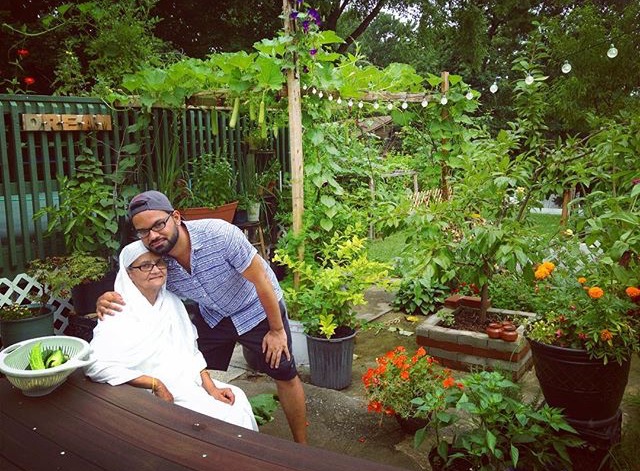 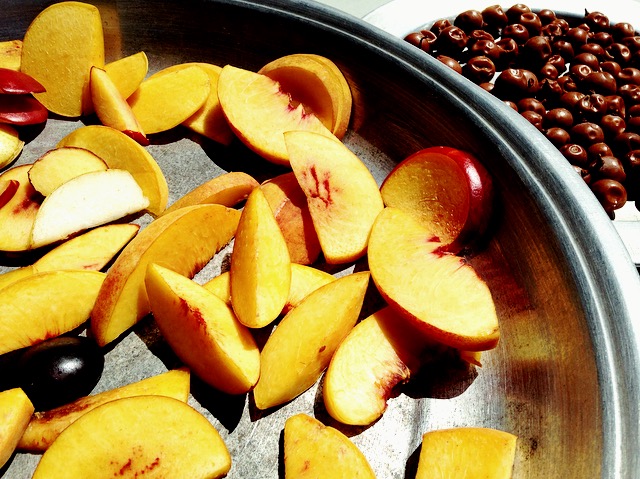 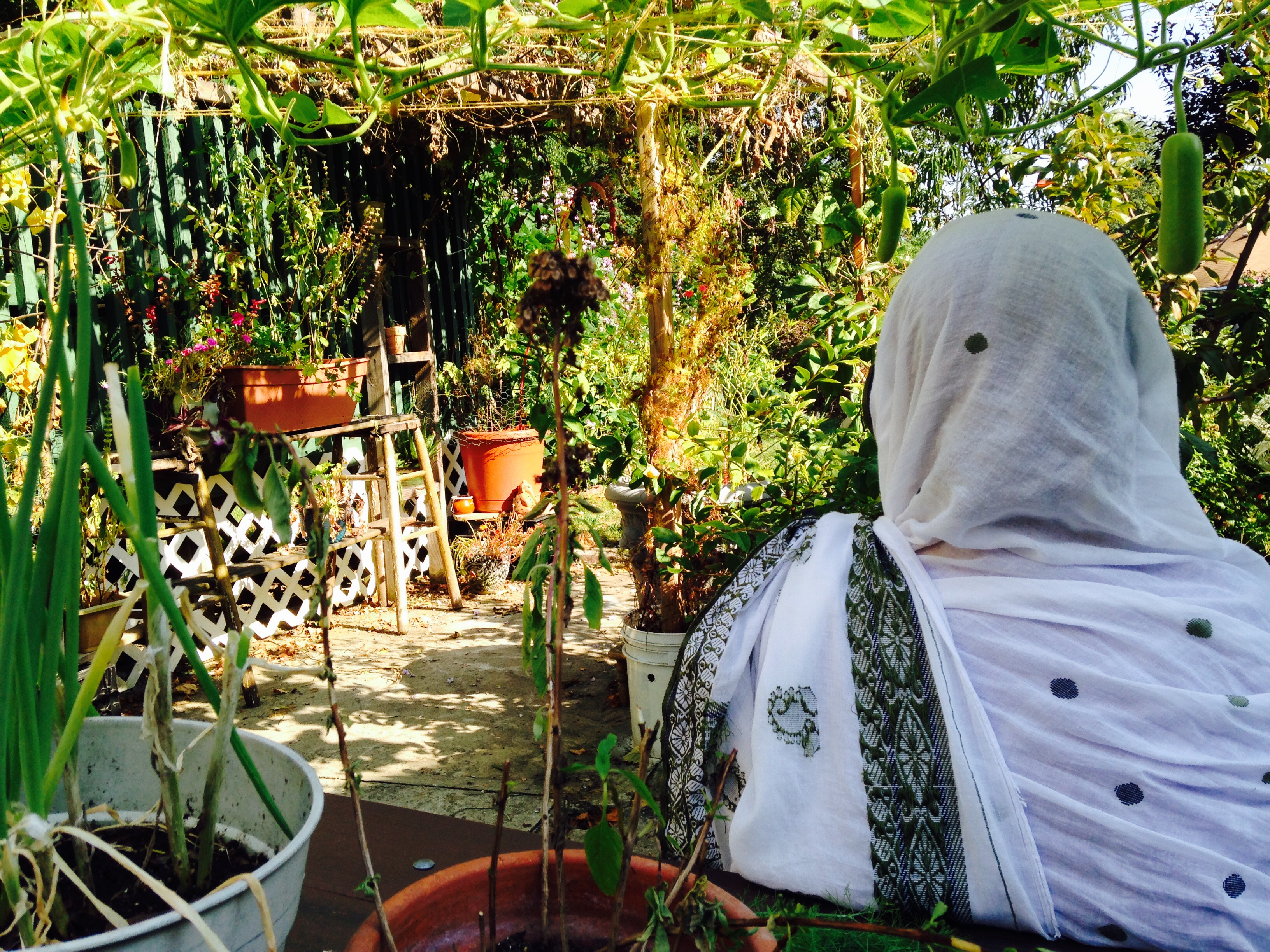 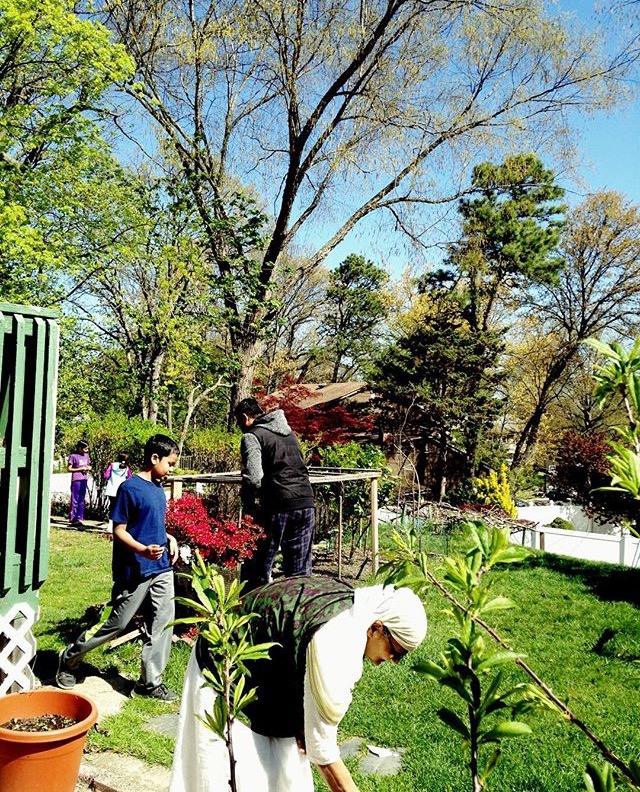 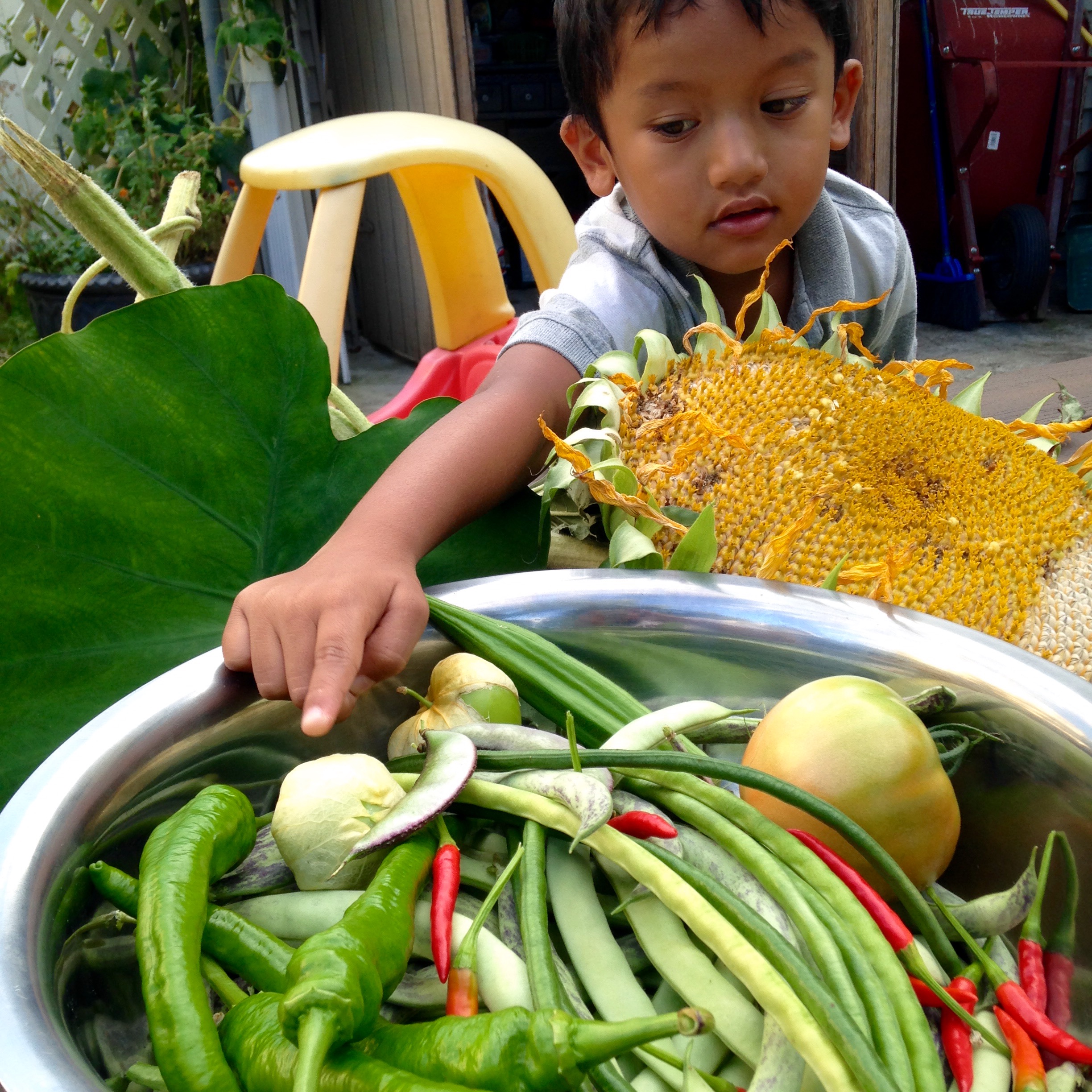 Needless to say, we stuck out in our suburban neighborhood. However, my mom’s gardening ways were the norm for millennia. Throughout human history, the home garden was a science lab, a pharmacy, and supermarket – all rolled into one. Fruits, vegetables, and showy flowers vied for space and attention in people’s yards. People grew plants as unique as their own family’s genomes, coveting prized seeds or sharing their bounties. I’ve heard many stories from my parents and elder siblings, whose nostalgic fits recounted backyard bananas with seeds, grapes that smelled like perfume, and of course, okras that looked like ‘lady’s fingers’. They pitied the selection of produce in American supermarkets, though in extension, they were lamenting the gardens they left behind.

For immigrant families, a home garden serves as something very important – it is a refuge. It’s a refuge from assimilation, when you know your bitter gourd will not please any palate, except your own. It’s a literal heritage-haven from the large-supermarkets, where homogeneity has stripped fruits and vegetables of the complexities of taste and texture known in the homelands, and throughout human history. But most importantly, it’s a refuge for memories, brought on by the scents and sights of familiar plants. My mom is not the only one breathing long sighs in our garden. My siblings and other relatives relax in the garden after a long day’s work, or after any of the daily grinds of an immigrant life. The garden beckons simpler times.

Gardens are also a place to create new memories in a new land. As someone who has lived most of his life in the United States, the garden never had the same nostalgic affect on me as it did with my parents or elder siblings. I don’t have fond memories of a childhood running through taro fields like my brothers, nor of collecting henna leaves like my sisters. Instead, the garden serves as a linkage between an American upbringing and the homeland that’s been so meticulously preserved in our family’s collective memory. It’s where the family is literally putting down their proverbial roots, entangling with the nearby oaks and maples. There is pride in their white-picket fence, covered with bright hyacinth beans.

Now with her two-dozen or so grandchildren, my mom has more minions to put to work in her ever-expanding garden. The garden is proving to be valuable in bridging the often-gaping distances between these two generations. It’s not only preserving generations-old crops, but it is also protecting centuries-old manual know-hows that are becoming extinct in our modern society. It’s where the kids can unplug and hear their grandmother yell in a fast-dying language, taking with her the colorful names of plants and the many terms of endearment alike.

Times – and demographics – have changed enough these days that we are no longer alone in our gardening ways. A few years ago, during one of my mother’s morning walks, she realized a peculiar bush protruding out of someone’s yard. Through her limited English, she self-invited herself to their garden, where a whole medley of Mexican vegetables awaited her. Since then, they began exchanging chili peppers and recipes from each other’s respective transcontinental homes, thus forging a friendship produced by a garden.

This autumn, with its unusually warm and long days, her own garden is still producing beans and peppers. But my mom is not taking any chances. She started collecting seeds for next year’s garden, each seed carefully picked for purity and then dried in the season’s lukewarm sun. In my mom’s, and now equally my own, collection of seeds, we haven’t just stored a cypress vine or an heirloom tomato. These little parcels of a freshly bygone garden are messengers of memories. Contained within are spring’s scents and summer’s colors, or autumn’s many tastes…